Japan is the third-largest economy after America and China. It is so wealthy that its regions boast the same economic heft as large countries. The entire economy of Brazil fits into the Kanto region that includes Tokyo, for example. Yet despite this wealth, Japan’s economic growth has been largely stagnant over a period known as the two “lost decades”. America’s GDP grew threefold during that time while China’s soared. After a short stint as prime minister in 2006-07, Shinzo Abe returned in 2012 calling for a bold, three-part plan of stimulus spending, monetary easing and structural reforms—the so-called “three arrows” of Abenomics. 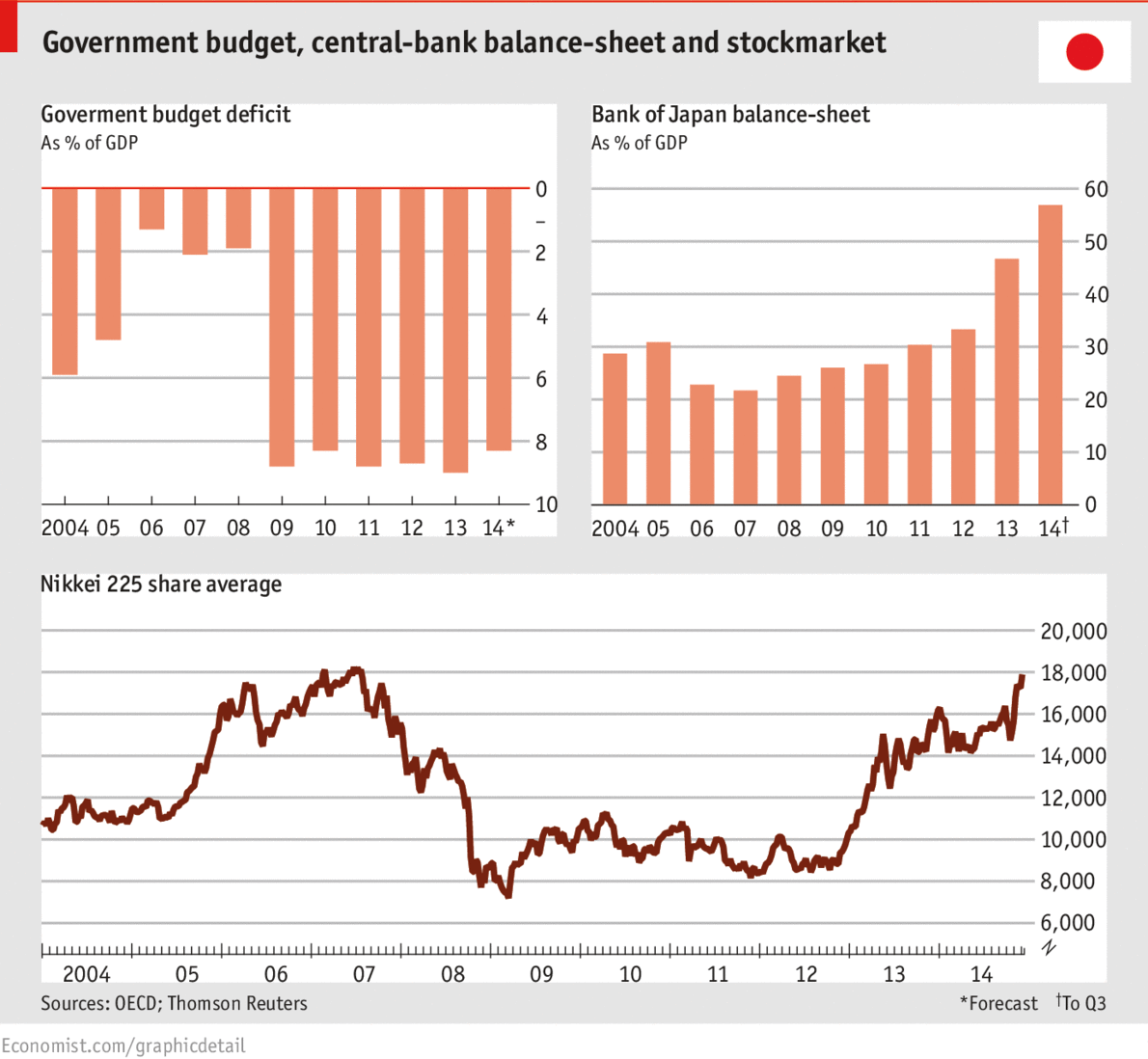 With the first arrow, the government splashed out 10 trillion yen ($84 billion) to boost the economy. With the second arrow, the Bank of Japan agreed to swell its balance-sheet, which in effect flushed capital into the economy. Japan’s stockmarket cheered the actions. But a previous government had scheduled a consumption-tax rise in April; when Mr Abe went ahead with it, demand fell and GDP atrophied. This prompted Mr Abe to delay the second part of a tax hike, due in 2015, calling into question his commitment to fiscal consolidation. 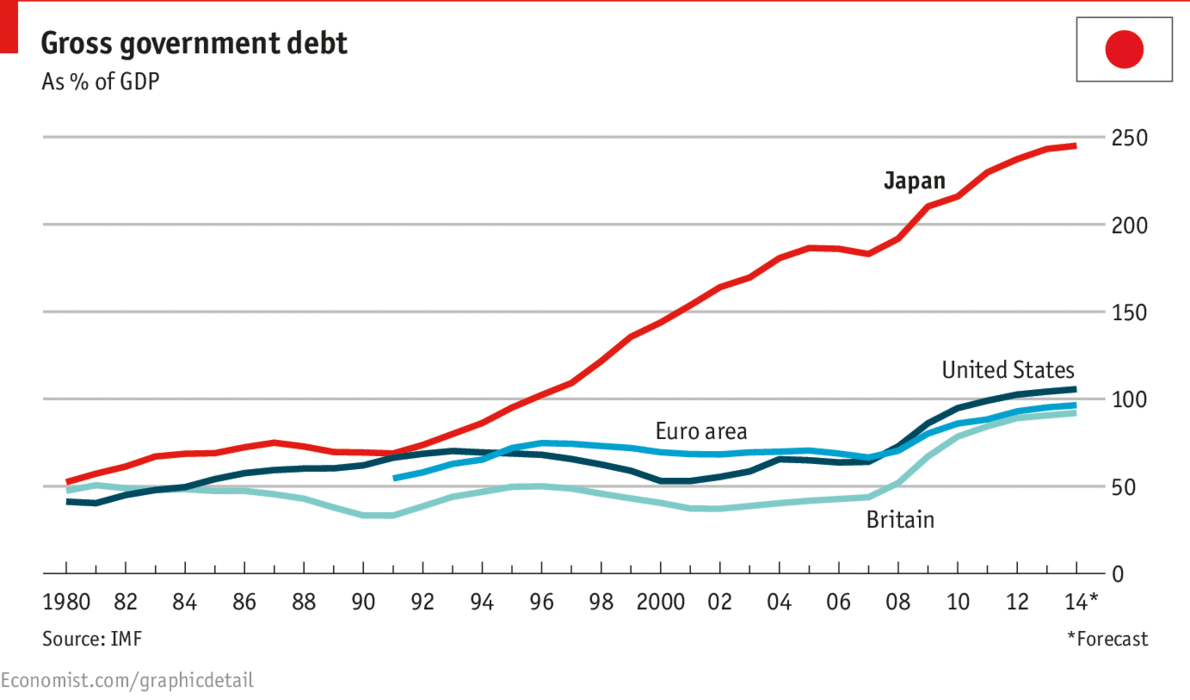 Decades of almost no growth and heavy government spending to support the economy has left Japan with the highest public debt in the world, at close to two and a half times the size of its economy and more than double that of industrialised countries. It makes the third arrow of structural reform critical, since only by removing anachronistic regulations and freeing companies to compete domestically and internationally can the country enjoy sustainable growth. It was precisely debt concerns that obliged Mr Abe to push ahead with the first consumption-tax hike despite the fact that it conflicts with his economic programme.

A big drag on Japan is its ageing and shrinking population. The country has 127m people and this is forecast to fall to fewer than 100m by midcentury because of the low birth rate. Already there are more elderly than youth, and this will become even more pronounced over the next several decades. It puts a strain on the economy in two ways. First, it means fewer workers to produce growth or pay taxes to fund public services. Second, more elderly means greater public outlays for pensions and healthcare. 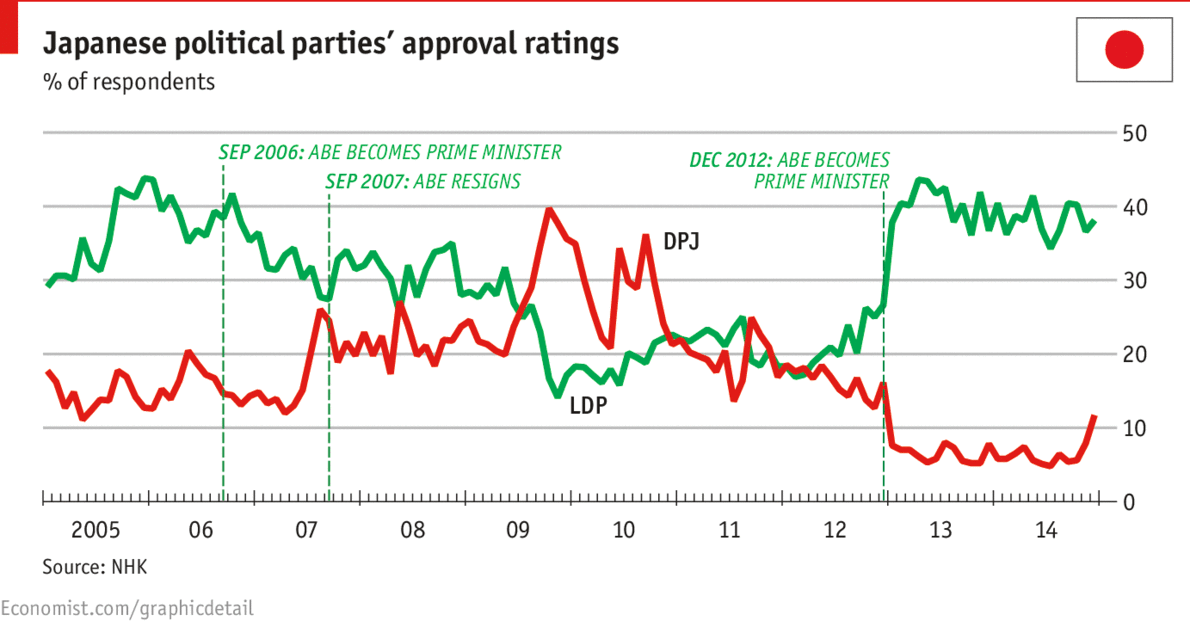 On December 14th Japan goes to the polls in a general election, which Mr Abe’s Liberal Democratic Party (LDP) is expected to win handily. That is a reversal from five years ago, when the Democratic Party of Japan (DPJ) won a landslide victory, ending more than half a century of nearly unbroken LDP rule. But the DPJ’s inept economic management, and its amateurism at managing the recovery following the earthquake, tsunami and Fukushima nuclear disaster in 2011, brought many voters back into the arms of the LDP. Abenomics promised a break from the previous, ineffectual LDP economic policies. The question for Mr Abe, and for Japan, is whether he will use a renewed mandate to shoot the third arrow of structural reforms.