Home / World / How Do You Rank the World’s Best CEOs?

How Do You Rank the World’s Best CEOs?

How do you measure a CEO’s impact? An HBR team recently addressed that question by ranking CEOs according to the increases their companies have seen in total shareholder return and market capitalization across their whole tenures. HBR’s resulting list of the 100 Global CEOs who have delivered the best financial results, published in its November 2014 issue, placed Amazon.com’s Jeff Bezos squarely at the top.

There’s no doubt that Mr. Bezos has done well for the company he founded. And clearly CEOs can and should be judged by the financial results they generate. But increasingly, CEOs and their companies are also being called to account for their impacts on employees, communities, governments, and society at large. The changing expectations have magnified the relevance ofnon-financial metrics and the need to paint a more complete picture of a CEO’s performance.

Companies now need to understand what value they are creating, not only for their investors, but also for their employees, customers, and society at large – and they need to know how their reputations reflect this net value creation. This is why Reputation Institute regularly surveys people around the world about their perceptions of companies, and produces a ranking on this score. It’s also why, since 2000, individual companies have consulted the Institute to gain a deeper understanding of how well they are regarded on non-financial metrics – and why. To develop consistent and reliable data, we rely on a scientifically developed and standardized survey instrument designed to gauge public perceptions of companies on seven dimensions: finance, leadership, workplace, citizenship, governance, products, and innovation. We call it the RepTrak scorecard.

When HBR invited Reputation Institute to add a nonfinancial perspective to its top 100 CEOs coverage, our team of researchers, led by Dr. Leonard Ponzi, Brad Hecht, and Viktoria Sadlovska, began with the RepTrak methodology, and created a special “non-financial performance index” using a subset of its categories – specifically, the scores for each company’s workplace, citizenship, and governance. Based on those scores, we reranked HBR’s list. (Note the caveat that our data reflect perceptions of companies, not individual CEOs. The assumption here is that, because most of these value-adding leaders have had substantial tenures, the reputations of the firms, no less than their financial success, reflect these individuals’ leadership. )

Based on our past research, we thought it likely that companies with higher reputations would tend to financially outperform those with lower reputations. On average, we have found that high-reputation companies have higher returns (both Return on Assets and Return on Equity), deliver higher earnings multiples, have higher market/book ratios, and have a higher Enterprise Value/EBITDA ratio – the key measures on which investors assess corporate performance.

But the scatterplot presented below demonstrates clearly that, within this set of top CEOs’ companies, there is not a linear relationship between financial and non-financial measures of performance; companies that deliver strong financial results do not always have good reputations with the public, and vice versa. 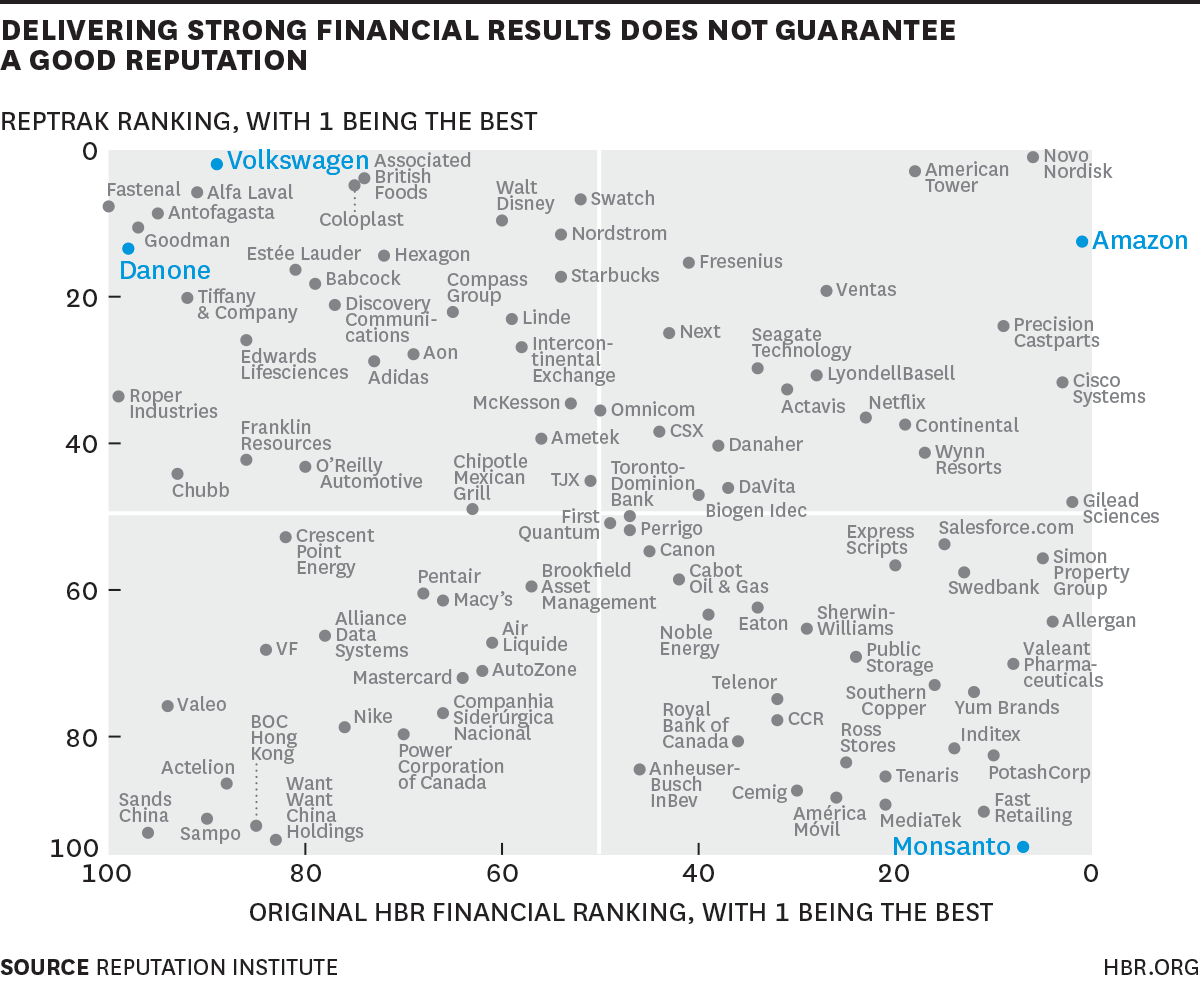 Look, for instance at the company names in the lower-right quadrant – the ones who did well financially but not so well on reputation. Monsanto is a case in point, its CEO ranked #8 on HBR’s financially based ranking, despite having the weakest reputation of all the companies. Meanwhile the upper-left quadrant of the chart is also well populated. These are the companies earning the highest public respect, but turning in lower financial results. (Again, let’s keep in mind that all these companies are financial high performers in the greater scheme of things; otherwise they would not be on HBR’s list.) Germany’s car manufacturer Volkswagen stands out in this regard, as does France’s food giant Danone. Both of their CEOs were well down the list ofHBR’s top 100, but have managed to win their companies high praise from the public on non-financial criteria. In general, the broad dispersion across quadrants shows that financial and non-financial metrics provide different points of view on a CEO’s performance.

This nonlinearity of course complicates the question of how one would arrive at a “net” assessment of a CEO’s legacy. How much weight should each ranking get? Should financial and non-financial criteria matter equally, or should they be weighted differently? More weight given to the financial or more to the non-financial?

We would argue that the truer measure of CEOs’ legacies is the amount of “public support” they helped to create for their companies during their tenures – the changes in people’s willingness to recommend, work for, buy products from, or invest in their companies. In fact, this is a measure that Reputation Institute regularly captures in its public surveys. And we have calculated the relative statistical contribution that financial and non-financial criteria make in predicting this index of public support. Our statistical analysis suggests that some 35% of a CEO’s legacy can be explained by financial performance, with the remaining 65% by non-financial criteria.

Thus, to assess these CEOs’ full legacies, we developed a combined ranking based on weighting the financial and non-financial performance rankings used in the scatterplot. Take a look at the table below. The second column in it is the original ranking released by HBR based on financial performance. The third column is the re-ranking of the same set based purely on reputations in non-financial (that is, “social”) performance areas. The first column is the ranking of CEOs that Reputation Institute arrives at by applying our weighted combination of the two. (And we’ve added a fourth column to highlight whose ranks change most.)

Now who rises to the top? CEOs one and two, as you can see in the overall rankings column, are Novo Nordisk’s CEO Lars Sorensen and American Tower’s CEO James Taiclet. Volkswagen’s Martin Winterkorn leaps up 68 slots to 21st thanks to favorable non-financial results. Disney’s Bob Iger also rises dramatically (from 60th to 10th) as do the CEOs of Fastenal, Alfa Laval, and Antofagasta. Starbucks’s Howard Schultz moves up from 54th to 14th place, reflecting a well-balanced commitment to governance, citizenship, workplace, and financial performance. Amazon’s Jeff Bezos drops only slightly from 1st place in HBR’s original ranking to a robust 3rd in the combined ranking.

Some CEOs see significant drops in ranking when we factor in the weak non-financial performance reputations of their companies. They include Japan’s Fast Retailing, and Taiwan’s MediaTek. Monsanto’s Hugh Grant suffers most heavily when ranked by this more holistic assessment of how his company has fared under his leadership. It drives down the assessment of his legacy from a lofty 8th to a more remote 82nd place in the adjusted ranking. Perhaps he has decided Monsanto must do more to boost its non-financial performance reputation; within the past few years, the company joined the World Business Council for Sustainable Development(WBCSD) and started offering Business Ecosystems Training globally to its employees.

The fact that financial performance and nonfinancial performance reputation do not correlate among HBR’s top 100 CEOs underscores why it is so important to keep refining our non-financial metrics and ensuring their rigor. And if both kinds of metrics are important to take the measure of a company, they may matter even more to assessments of a CEO’s tenure. The most holistic measure of a CEO’s contribution over his or her tenure would be a reliable answer to one question: How much better or worse is the overall reputation of the company compared to the day this leader stepped into the role?  A great CEO’s legacy is never as one-dimensional as the ledger.

Dr. Charles Fombrun is founder and chairman of Reputation Institute, a private advisory and research firm specializing in corporate reputation management that consults to companies around the world.