Who needs Disneyland when you can have a theme park for youngsters to declare their loyalty to China’s Communist Party?

It’s just one of six parks the city has planned to promote patriotism and party ideals.

The focus of this particular park will be on the people of the Communist Party.

Described by state media as an enjoyable “red benefit” for the city’s residents, the new attraction’s the biggest communist-themed park in Central China.

The park’s dotted with the faces and stories of 29 “excellent party figures” on bronze plates and 23 artworks highlighting significant moments from Chinese Communist Party history between 1921 and 2014.

The events are depicted in installations inspired by the traditional Chinese art form of paper-cutting. 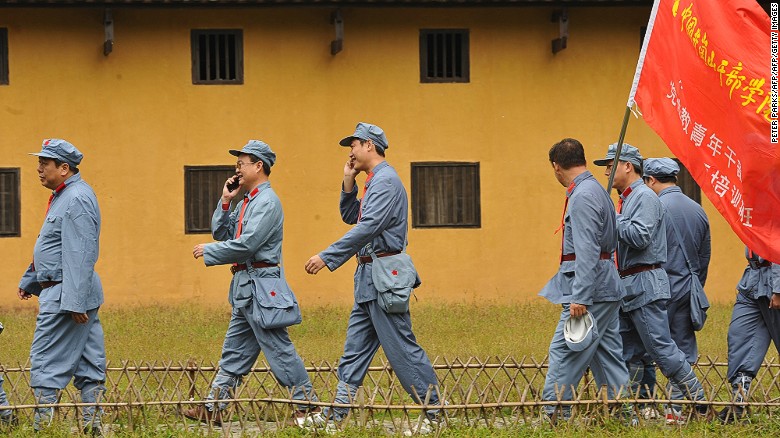 Red tourism is big business in China. Here, tourists dress up as Red Army soliders during an educational tour in Jinggangshan, the birthplace of the Chinese revolution.

The park consists of four display areas with different highlights and mini-themes.

And it isn’t shy about its purpose of indoctrinating the young with communist ideology.

One of the attractions is a square where students and youngsters can take an oath to join the Communist Youth League or become party members.

The children’s playground features adorable cartoon figures of Red Army soldiers, while the ground is decorated with a map of the party’s famous Long March.

The Long March was a military retreat led by Mao and his Communist army in order to evade suppression of the Nationalist Party army in the 1930s.