Astana Could Build Ski Slope on Top of Apartment Block

It’s not quite a cozy chalet ensconced in the Swiss Alps’ snow-peaked caps, but for residents of Kazakhstan’s capital Astana the Slalom House residential project — an eye-catching new winter sports facility — could bring the slopes to their front door.

Despite suffering bitterly cold winters where temperatures regularly fall below minus 15 Celsius (5 Fahrenheit), Astana has few places where local ski and snowboard enthusiasts can hone their skills.

A group of local residents have even been reduced to fashioning their own mini-slopes in public parks by packing snow together during the winter months, according to the Astana Times.

Skiing to the rescue is Slalom House, a 21-storey apartment block with a 326-meter (1,000-foot) artificial slope descending from its roof — if it is given the go-ahead.

The project has been proposed by avid skier Shokhan Mataibekov of the Union of Architects of Kazakhstan.

Mataibekov told CNN via email that the project will cost roughly $70 million and that there are already parties interested in taking the design proposals further.

The idea of an artificial slalom track mounted on a building came to Mataibekov because it takes four hours by car to reach the nearest ski slopes. 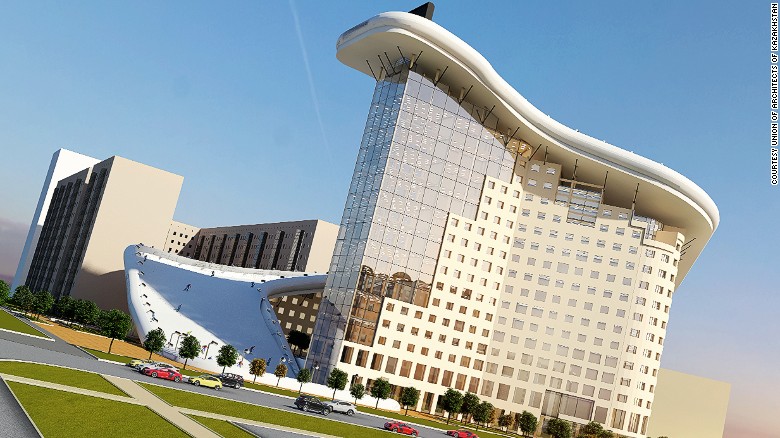 An artist’s impression of the Slalom House which has been designed for the city of Astana in Kazakhstan.

A document submitted for the WAF reveals the lower floors of the building would provide space for retailers and food outlets with 421 two-bedroom residential apartments above them.

A separate entrance which gives access to the slope would be serviced with “panoramic elevators” taking visitors to the top of the building.

Although there are no plans to commence construction, Slalom House is unlikely to look out of place in Astana, given the city’s spectacular skyline.

Its skyline is dotted by futuristic buildings which cater for museums, retail spaces and Kazakhstan’s national government, while local residents’ nicknames for the buildings — “dog bowl,” “flying saucer” and “lollipop” — hint at the city’s architectural ambition.

Despite the existing dearth of ski facilities around Astana, the country has more than a passing interest in winter sports. 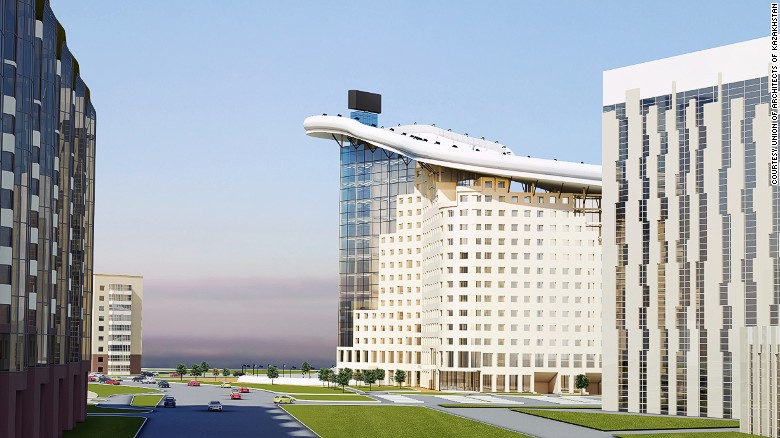 The southern Kazakh city of Almaty — which was the country’s capital up until 1997 — bid to host the 2022 Winter Olympics but was beaten by Beijing in July.

A large contingent of Kazakh athletes also competed at the 2014 Winter Olympics in Sochi, Russia, including alpine skiers, freestyle skiers and snowboarders, though the country could only bring home one bronze medal courtesy of figure skater Denis Ten.

Most of Kazakhstan’s best-known winter sport facilities are situated close to Almaty, including the world famous Medeu speed skating rink.

Almaty will host the Winter Universiade, a biannual winter-sports competition for student athletes, in 2017.