Georgia: China’s Way Into the Caucasus

Georgia has an unenviable position in the Caucasus. Torn between Russia and the West, its people demand security and prosperity.

China’s rapidly growing presence in Georgia opens up the interesting possibility of a third player in the South Caucasus. Despite Georgia’s best hopes, however, Russia and China could just as easily cooperate in the region rather than confront each other.

China has good trade relations with the South Caucasus and has poured extensive investment into the region, a key intersection between Asia and Europe. Georgia has certainly benefited from China’s interest in the region. According to the Georgian National Statistics Office, China is now Georgia’s third-largest trade partner by volume, just behind Turkey and Azerbaijan and slightly ahead of Russia.

With little interruption, bilateral trade has increased from just under $115 million in 2006 to more than $820 million in 2014. In March 2015, China and Georgia announced the launch of a feasibility study on a possible free trade agreement. A recent visit by a Chinese delegation to Tbilisi confirmed the talks are nearing a good end, with potential economic benefits for both countries. The Georgian government also sees it as a unique opportunity to make the country a logistics hub, attracting even more foreign investments beyond Europe. 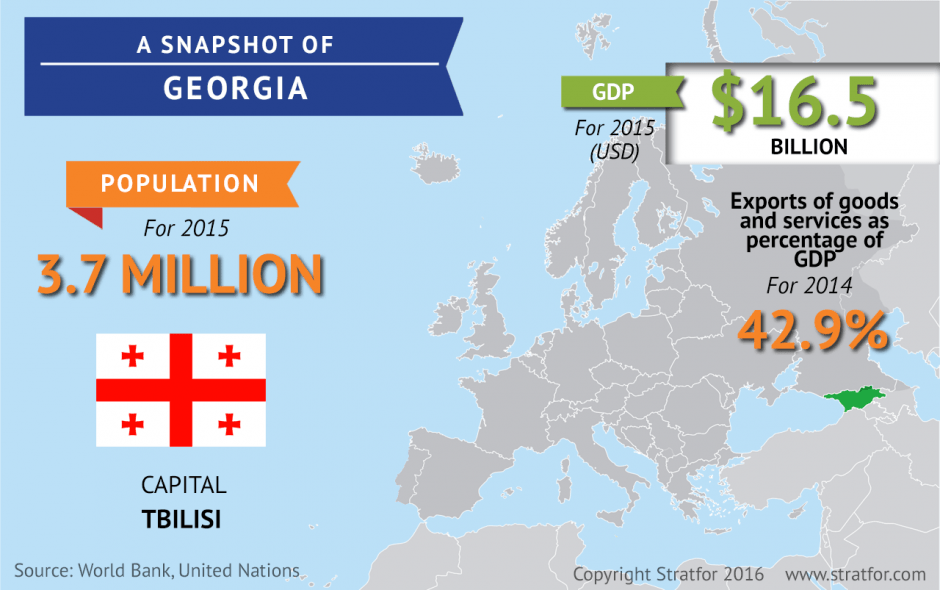 China’s appreciation for the South Caucasus is a recent phenomenon, driven largely by Beijing’s ambitious multibillion-dollar bet on the Belt and Road Initiative, in which Georgia and the South Caucasus are set to play a strategic role. Georgia’s Black Sea ports, east-west highway and railway infrastructure are invaluable assets for China’s trade ambitions connecting the Eurasian interior and Europe.

For Georgia, closer relations with China are a welcome change from long unrequited aspirations to join the West in the shadow of a re-assertive Russia. The pro-Western Georgian government is by no means going to divert its political course, but it nevertheless is expected to ensure political and economic stability for its citizens. Chinese investment would create more jobs, expand economic growth and afford Tbilisi a certain degree of freedom of action from Russia’s regional domination, especially in its own borders. Russian and separatist forces consistently advance the boundaries of the breakaway region of South Ossetia, mainly in the hopes of inching closer to Georgia’s crucial highway infrastructure.

Of course, Beijing has so far kept its distance from Georgia’s territorial problems, though it tacitly supports Georgian claims. Still, Georgia’s place in the Belt and Road Initiative may make its stability a greater priority for Beijing once economic relations intensify and become more interconnected. At least that is what Tbilisi hopes. After all, as it has elsewhere in the world, Chinese economic clout tends to be accompanied by deeper political engagement.

Unfortunately for Georgia, it will be only a small piece in China’s Belt and Road Initiative. When the Chinese delegation visited Tbilisi, it also visited Russia, Armenia and Azerbaijan. Beijing will pay more attention to the region but may not actively invest resources into Georgian security beyond law enforcement and counterterrorism cooperation, especially if its actions would clash with Russia’s. There are simply other routes in its grand projects.

Moreover, Moscow and Beijing could easily collaborate on security issues to avoid upsetting each other’s interests. In some cases, China already challenges or even surpasses Russia’s economic and political clout, such as in the Central Asian countries. Beijing is their largest trading partner and has made some successful inroads in the security realm — Moscow’s traditional sphere of influence. Yet Russia and China have not openly clashed over this equally important region. Georgia may want China’s heft in the Caucasus, but it is unlikely to confront Russia’s anytime soon.