Home / Business / Why Is China Building A New City In Georgia?

Why Is China Building A New City In Georgia?

It was a patch of modern urban China transplanted upon the Georgian countryside. Rolling, verdant hills abruptly gave way to the tight phalanx of identical ten story apartment blocks that sat on a perfectly aligned street grid, with a sturdy gate surrounding the perimeter.

The exteriors of the buildings were decorated with heavily pronounced occidental facades — faux maroon bricks, ornately framed windows, and dozens of little rectangular balconies. It was the same scene I’ve looked upon thousands of times while wandering through the hinterlands of China’s cities, which wasn’t at all a coincidence: this new city in Georgia is 100% Chinese.

Hualing Tbilisi Sea New City is the name of this place. It is to be an all-inclusive, macro-planned intentional city in the previously undeveloped north of Georgia’s capital, right on the banks of the city’s massive reservoir.

This new city is to have its own hospitals, schools, shopping malls, hotels, and the largest wholesale and retail trading center in the Caucasus, as well as row upon row of typical modern Chinese housing.

At the center of this emerging new urban expanse is the Hotels and Preference hotel — a giant five-star, blue glass monolith which features 250 of the best rooms in Tbilisi and the largest ballroom in the country. I met Tatia Sioridze and Giorgi Botchorishvili beneath the giant crystal chandelier that hovers above the hotel’s gargantuan lobby. They both work for the Hualing Group, the private Chinese enterprise that’s making this new city happen.

But why would a company from dusty Urumqi, in China’s far western Xinjiang province, have any interest in building a city in Tbilisi, 3,459 kilometers away?

The story goes that Mi Enhua, the founder and president of Hualing Group, fell in love with Georgia after visiting in 2007 to the extent that he wanted to help rebuild the country as it emerges from decades of post-Soviet turmoil.

“He just liked Georgia because of its scenery and good political and business environment,” Sioridze said. “So they decided to start developing their business here.”

Whether the reason behind Hualing’s origins in Georgia are perhaps a little more pragmatic than this is irrelevant, as the company is now the single largest investor in the country. Hualing has already pumped half a billion dollars into Georgia already, with an array of large-scale projects which include the Kutaisi Free Industrial Zone, various luxury hotels, a major wood harvesting operation, a booming wine export enterprise, a massive tea cultivation program, and 90% ownership of the once domestic Basisbank, in addition to the new city. 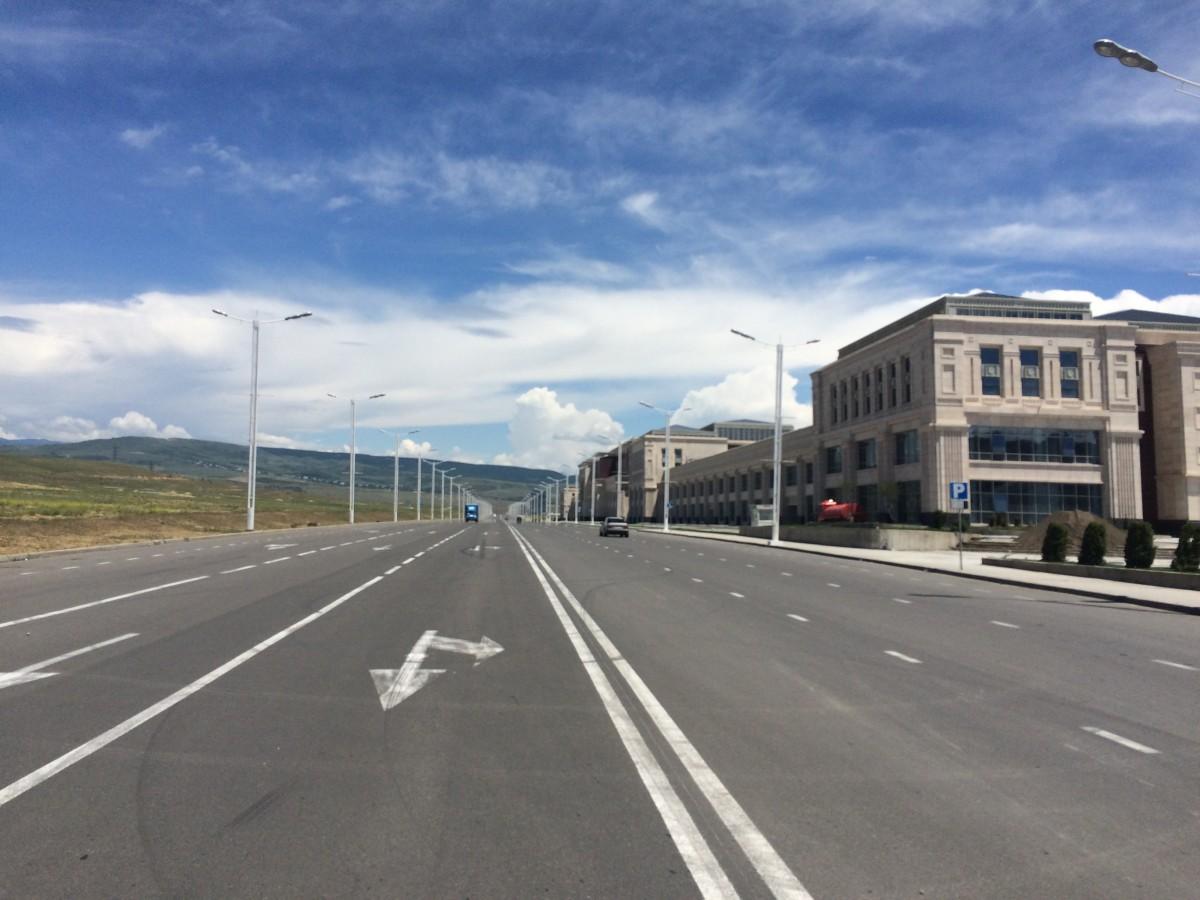 Hualing Tbilisi Sea New City is rising up from what was recently agricultural land outside of Georgia’s capital. Image: Wade Shepard.

However, Hualing’s international operations are not exclusive to Georgia. Running flush with China’s “Going Out” policy, which encourages domestic companies to invest internationally, Hualing has extended its reach far beyond its native country, and now has an international portfolio which includes projects in the EU and the USA, in addition to Georgia.

The origins of Tbilisi Sea New City resulted from an interesting deal that the Georgian government made with Hualing. Needing additional infrastructure to host the 2015 Youth Olympics but not having the adequate funds to build it themselves, Georgia turned to Hualing. In exchange for building a “village” for the athletes to live in during the games, the Chinese company would be granted rights to sell the properties later on as well as develop 420 hectares of surrounding land for a new city. According to the Hualing representatives that I spoke with, it was a straight trade — no money was exchanged.

What was local reaction to a Chinese company building a new city in Georgia?

“At the start some people came with demonstrations, saying that China was invading Georgia,” Botchorishvili explained. “At first they were saying that a half million Chinese people would come to live here, but it was not correct information.”

According to the MOU that Hualing signed with the Georgian government, which covers all of their projects in the country, no less than 70% of their long-term workforce must be sourced locally. Currently, the company has exceeded this requirement, and over 80% of their workers are from Georgia — including much-sought middle and upper-level management positions, such as those held by Sioridze and Botchorishvili, who are both local Georgians.